Challengers of the Great Beyond 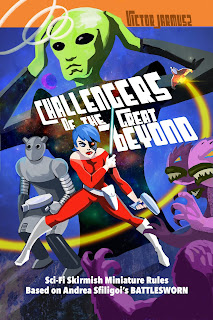 A new skirmish game from Ganesha Games is Challengers of the Great Beyond (CotGB), intended for use with miniatures in a space opera style sci-fi world. This is a standalone game that is a progression of the fantasy Battlesworn rules written by Andrea Sfiligoi. As I wrote CotGB, I though it would be good to outline some of the differences with Battlesworn.

Battlesworn, which came out in 2013, is really a unique set of rules. It has a twist to most other sets of rules in that it uses a bidding system to determine initiative, as well as melee and shooting attacks. It also does not use measuring sticks - terrain instead dictates the extend of movement.

A traditional game will often determine how many units or figures you can activate with a random dice roll or multiple dice rolls. Here, you instead bid between 1 and 6 how many units you get to activate. If your bid is lower, that is how many you activate, if you bid higher, you activate the difference between both bids. There is a mechanism to deal with drawn bids. The lower bidder moves first and can attack, the higher bidder moves second, mainly reacting to the lower bidder or move around, they cannot initiate attacks. This provides a fair amount of agency, as you have to think of what you want to achieve this turn, and what your opponent wants to achieve, and try to get the bid right. It also gives the game at times a chess-like feel, where it can feel like you have out-witted your opponent with a good bid!

A difference between both rules is that in Battlesworn, you can bid any number between 1 and 6 throughout the game. In CotGB, standard playing cards are used instead, each player gets 12 cards, two 6's, two 5's, two 4's etc. Two cards are put aside as you play out 10 turn. Apart from helping with counting down the turns in the game, a big effect of the limited bid numbers is that you must plan the tempo; at what stage of the game you want to bid low? At what stage you want to bid high? It also reduces the number of drawn bids - for example, in the original Battlesworn, both players may be going for low bids of 1 or 2 towards the end of the game, and might continually bid the same number. 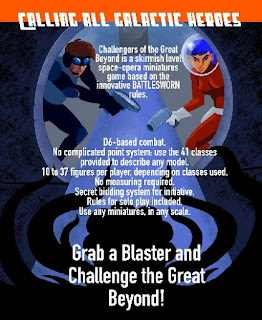 The mechanism for melee and shooting bids remain unchanged from the original Battlesworn. Here you instead use a six sided dice, place your bid face up on the table, but cover the dice with your hand or a lid. Both bids are then revealed at the same time. Unlike initiative, the higher bidder gets the full value of their bid (not the difference) - but the lower bidder goes first, so may defeat their opponent before they strike back.

Another difference between both sets is the introduction of squads. Battlesworn has the "rabble" concept, 1 life point models (rather than 4 life points) that were cheaper but acted as individuals. Squads in CoTGB are 4 or more models of 1 life point each that stay together. However, unlike rabble they do not act as individuals, the whole squad instead acts as if 1 figure. This was an important thing I wanted to represent in the game - large numbers of "mooks" that blaze away at heroic characters but are not as effective (important for Space Opera!). This also increases the figure count from Battlesworn where you generally had up to 12 figures, in CotGB, you can get up to 30+ figures a side. With the extra figure count, the rules have also been modified as to how line of sight and cover work.

The classes are also quite different to that in Battlesworn. They are probably closer in feel to those in Knights and Knaves, where each class has a number of abilities rather than just one. This also means that there is no multiclassing, but enough variety is represented so that you can run most figures available. Some abilities are similar to Battlesworn, most are completely new.

Psionics in CotGB is similar in effect to a lot of the magic powers in Battlesworn. A change here, however, is that they operate independently to the action point system - instead, psi users draw on a pool of psi points that reduces each time a power is used. This helps give psionics a powerful impact in the game, as they can be used in addition to the initiative bid, and allows characters to combine them with an action to pull off heroic feats. 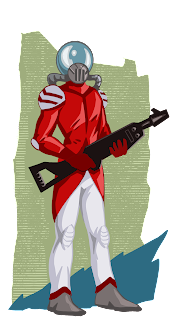 Overall, CotGB was born out of a desire to bring Battlesworn into sci-fi. I had played the game with various futuristic mini's and thought that with a few tweaks, it would work well in a shooting heavy, high tech environment. The few tweaks became many as the game developed. Some key philosophies were that despite the shooting, in space opera fashion, hand to hand fights would remain a decisive way to win. Powerful characters should also be able to survive against gauntlet a expendable squads. This also flows through to the victory system where 5 squad figures are equal to most single characters - so beating up on squads will not give victory in many cases, you still have to take down the enemy characters.

I hope that those who play this game get as much enjoyment from it as I do!

For some more reports and resources on Battlesworn and CotGB, there is some excellent information at the Stronghold Rebuilt.