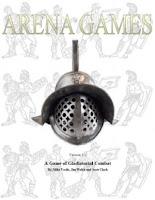 In my last blog post, I statted up a group of 54mm gladiators for playing Munera Sine Missione and Arena Games. I thought I would play out the suggested campaign at the back of the Arena Games rules. The campaign takes the form of a knockout competition, so that 7 games are needed to play with 8 figures - round one the 8 gladiators fight in pairs over 4 games. Tis then halves as the winners paly each other in pairs in two games, then there is the final fight.

One challenge was that I was doing this solo, and there is a dice allocation mechanic in the rules which involves a bit of bluffing and setting up a future move. I decided initially on using a dice roll to work out how the points were allocated, but his gave some strange results. Eventually I just used judgement on how to allocate the points.

I am using 54mm gladiators that I covered in my last post 54mm Gladiators. The initial draw looks like this; 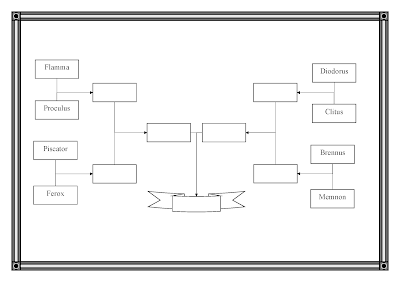 Fight 1: Flamma (Myrmillo) vs Proculus (Thracian)
These two evenly matched gladiators traded blow for blow until Flamma took too many hits to the legs and was reduced to a one hex move. Proculus could not finish it off and ended up losing his shield. This was down to the wire with both gladiators down to 4 or 3 attack dice from 6. The critical time came in the 6th turn where Flamma won initiative and had Proculus against a wall, and then getting the critical body blow, so it did not go to appealoculus. For his efforts, Proculus gained a +1 to inititaive skill. Here is the final position: 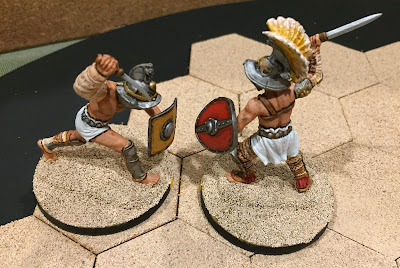 Fight 2: Piscator (Retiarius) vs Ferox (Contra-Retiarius)
This fight started with a successful net toss by Piscator, who was able to inflict 4 wounds before Ferox broke free. Piscator tried some fancy manoeuvring rather than trying to retrieve his net which backfired when Ferox got some solid leg hits reducing Piscator to a one hex move. With the movement advantage gone, and the net too far away to retrieve, Ferox closed out the fight in the 3rd turn with an attack to the head, which was another mortal wound. The main lesson was for the Retiarius to always retrieve the net...Ferox gained a popularity skill. Here is the final position: 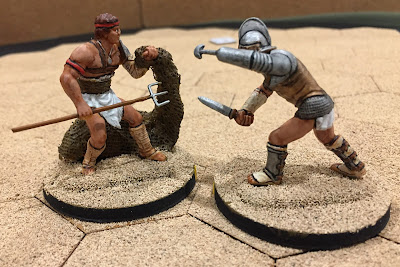 Fight 3: Memnon (Myrmillo) vs Brennus (Velite)
This was going to be interesting, as in some test games earlier, Brennus was very hard to beat. Brennus was a lot more successful in his attacks, doing 7 hits on Memnon, but they were all scattered. Brennus only too 4 hits, but 3 were to the head meaning....another mortal wound in game terms. A win to Memnon, who also gained a popularity skill. I'm not sure that skill is too useful, however, as none of the fights have gone to crowd appeal yet. Here is the final position: 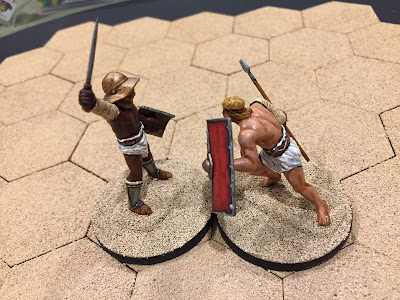 Fight 4: Diodorus (Dimachaerus) vs Clitus (Hoplomachus)
Clitus had better armour, but Diodorus was faster with a good double sword attack. Diodorus was finding it difficult to break through the armour after 2 turns of trying. So he gambled on getting rear attacks by trying to finish the turn at the back of Clitus, hoping to win initiative. Clitus won initiative on the 3rd turn and made Diodurus pay. Diodorus tries again, but again lost initiative, eventually losing on the 4th turn with another mortal wound to the head. Clitus only took one wound in the whole fight, which sent an ominous message. He also gained the +1 initiative skill, which seemed appropriate. Here is the final position: 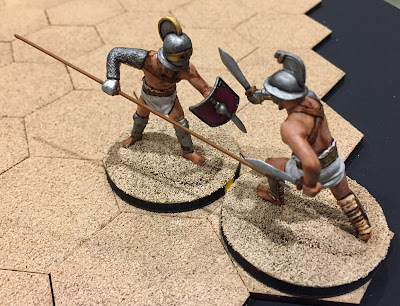 The position after the first "round 1" fights; 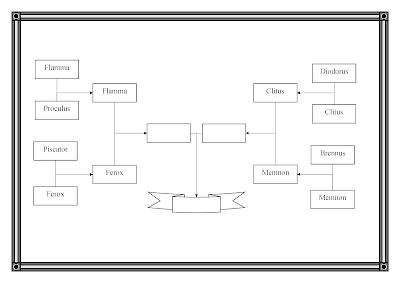 Qualifying Fight 5: Ferox (Contra-Retiarius) vs Flamma (Myrmillo)
Flamma started with a strong attack that only caused one wound to the heavily armoured Ferox. Then Ferox countered with a quick 3 wounds to Flamma, who was now reduced to 5 attack dice. It seemed that Flamma was now doomed. Flamma tried the (failed) Diodorus tactic of ending the turn at the rear and attempt to win initiative. Flamma pulled it off and was able really damage and wear down Ferox. Unlike previous fights, the wounds were fairly scattered so Ferox was tkane down to zero stamina by the 4th turn - the +1 initiative skill to Flamma worked. It went to appeal. Being the 4th turn, Ferox needed a 6 on a D10 to survive, but had the popularity skill giving a +1. He rolled a 5, so that skill worked 2. The first time the loser has survived a fight. Flamma gained the initiative skill.

Qualifying Fight 6: Memnon (Myrmillo) vs Clitus (Hoplomachus)
It looked like Clitus had the edge in this fight, better armour, the same initiative, and a long reach spear. Memon had to start fast, which he did, scoring 2 hits on Clitus. However, Clitus got probably the best combat rolls of the tournament so far, inflicting 6 wounds on Memon, 5 on 1 leg, so reducing Memnon to a 1 hex move. Against a gladiator that has a 2 hex attack range with the spear, this become mission impossible. Memnon could have thrown his sword, but that was a low percentage play against a relatively healthy Clitus. Memon was worn down to below zero stamina, ending the fight. Clitus gained the popularity skill (though there has only been 1 appeal in 6 fights....), not sure why these gladiators want the crowd. Here is the final position: 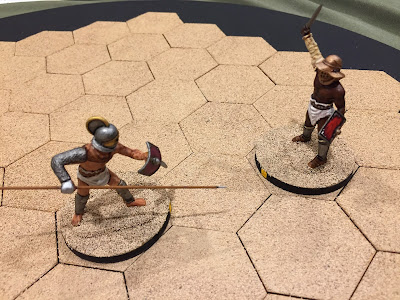 Here is the position leading up to the final fight: 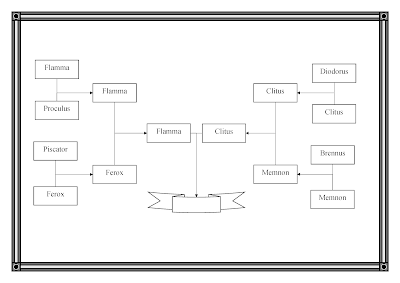 Final: Flamma (Myrmillo) vs Clitus (Hoplomachus)
The final fight. Of the 2, Clitus had been the more convincing so far. This was to prove an epically dour fight, as neither gladiator wanted to take too much risk. The first breakthrough came when Clitus took enough hits to lose his shield. This turned the fight to Flamma's favour. The critical point came where Flamma skirted with the Arena wall to get a rear attack, and Clitus won initiative and tried to rein a flurry of blows upon Flamma, but the attack failed. Clitus was taken to zero Stamina by the 7th turn, the longest fight so far. It went to appeal - on the 7th turn, a roll 4+ was needed, and Clitus had +1 for popularity. He rolled a 2..... Here is the final position: 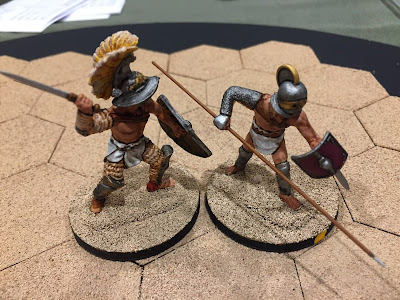 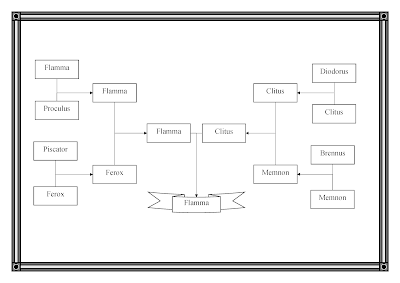 This was quite a deadly campaign, only two gladiators from eight survived. A lot happens in each turn, and though the games last a maximum of 10 turns, the average length was 4 turns. The games did provide a lot of action and there was plenty of movement.
Posted by Victor at 21:24