I recently read a very interesting online article titled Was Pontarii Fighting the Origin of the Gladiator-Type Retiarius? An Analysis of the Evidence. It indicated that the pons fight scenario was a recreation of the siege of Tyre, derived from the following text by Diodorus Siculus 17.43.7-9;

When the Macedonians moved up towers as high as the walls and in this way, extending bridges, boldly assaulted the battlements, the Tyrians fell back on the ingenuity of their engineers and applied many counter-measures to meet the assault. They forged great tridents armed with barbs and struck with these at close range the assailants standing on the towers. These stuck in the shields, and as ropes were attached to the tridents, they could haul on the ropes and pull them in. Their victims were faced the alternative of releasing their arms and exposing their bodies to be wounded by the missiles which showered upon them, or clinging to their shields for shame and perishing in the fall from the lofty towers. 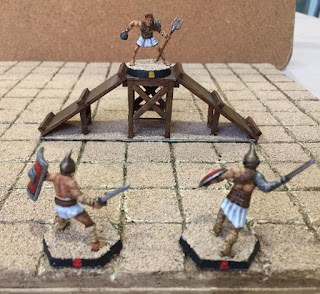 So, using the Munero Sine Missione v3 rules, I tried to recreate the pons fight. Firstly, I had to modify a Retiarius to become a Pontarius (essentially abandoning the net for throwing rocks) - the Moonraker Miniatures retiarius seemed to fit the bill for this as it held the trident in the left hand, allowing for the net to be cut out from the right and replaced with a throwing rock. As to the "secutors", I thought it would be fun to get some secutor/murmillo gladiator figures and replace the heads with Macedonian phalangite heads - the plastic figures from the Spartacus Blood & Treachery boardgame with warlord heads from a Macedonian pike sprue looked like a good fit as proxy roman style Macedonians.

The approach of the Secutor/Macedonians was met with a lot of rock throwing - it didn't cause any damage, apart from knocking off a shield that was then picked up, and gave the Pontarius some virtus points from working the crowd. Eventually, the bridge assault began; 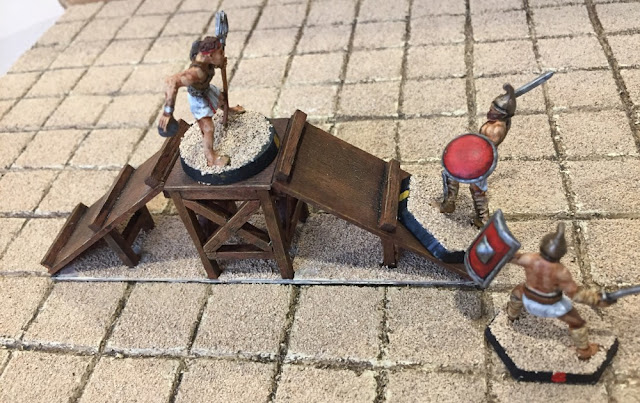 The attack was repelled with a trident thrust pushing the invader off the bridge, and a rock throw bringing about a "double 2" critical event, the save from which was failed. One secutor was down, but the other used the opportunity to try to approach the bridge from the other side; 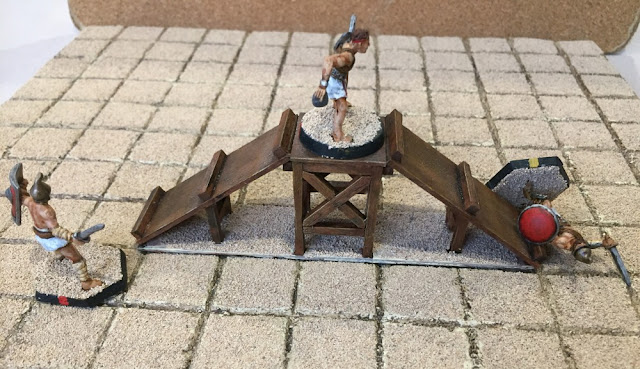 This began a real tussle, the remaining secutor managed to scale up the ramp and just push the pontarius back, but did not have enough remaining AP to get to the top of the bridge to secure victory; 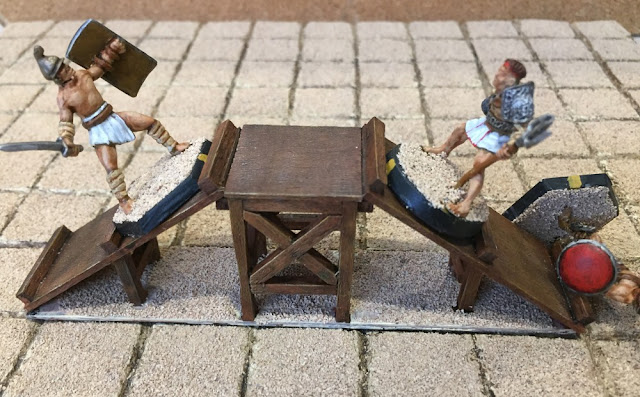 The pontarius, using the built up virtus points albiet some clumsy attacks, was able to get back on top and slowly push the secutor back down. The secutor was wounded and started accumulating fatigues; 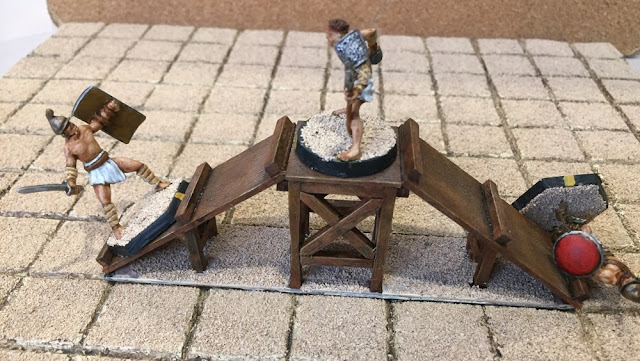 The secutor was determined and was able to scale the bridge again, even losing his shield which fell to the ground out of reach. The pontarius was quite unlucky at this point and had some ineffective attacks, notable some double 3 critical events fatiguing him. A big push from the secutor with an AP roll of 6 allowed him to push back the pontarius and seize the top of the platform; 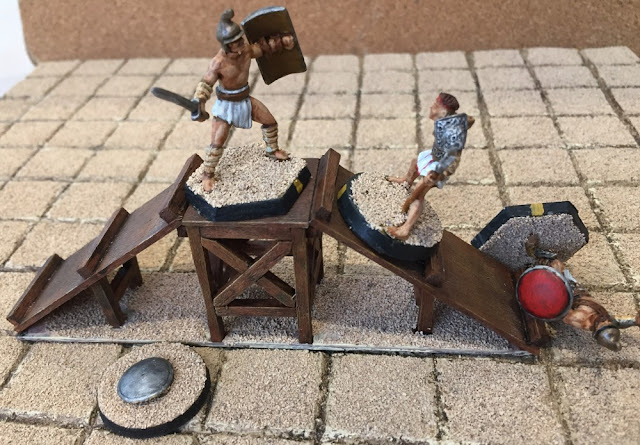 On top of the loss, the bad luck continued for the pontarius who failed in an appeal to the crowd. So a "historical" result was achieved with Macedonians winning the siege of Tyre.

It was a close fight in the end which could have gone either way, and gives an interesting alternative to the 1 vs 1 fights on sand.