Tonight I played Panzer Miniatures Rules with Doug at the Sutherland Shire Gamers in 15mm. We have found these rules to have a lot of depth and better "realism" (if this concept is possible) as opposed to other commercial rulesets. Tank penetration is deterministic - you either beat the armour value or you don't, it is not a random dice fest. The rules are also very fast to play, and we can easily finish a game on a Friday night.

We ran a WW2 scenario using the map from campaign 2, scenario 2 "Panzerschlact" from the Armored Combat Scenario's and Additional Rules for a Sergeant's War and other WW2 Games. The scenario's in this book are quite good, giving intelligent and coherent rules for terrain, and where tanks can get hull down positions etc, even to defining the height of hills.

We ignored the force composition in that scenario and ran with the following (theoretically equal) force from Panzer Miniatures Rules instead;

This picture shows the Soviet deployment, with tanks either taking up hull down positions of hills, and some being in a gully (the brown felt) 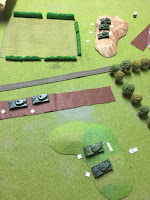 This next picture shows the German armour arrive on table (looking from the perspective of the Russian player); Initially, an IS2 fired on the Ferdinand but could not penetrate the turret from the range it was shooting at. It seemed a bit grim for the Russians, but the IS2's were able to quickly take out 2 Tigers, and then the Panzer IV who advanced to a hull down position on a hill, but to no avail. Meanwhile, the T-34/85's advanced to a gully to get closer ranged shots in, but experienced very hard going against the Panthers and the Ferdinand. Despite being hull down in the gully, they were slowly being battered, with one being KO'd. On the Russian right flank, a Tiger scored a track hit on an IS2, and the crew decided to bail. The Ferdinand then took out another T-34/85. Each side was now 3 tanks down. The position looked like this; 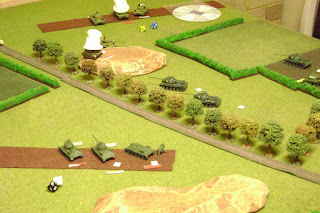 The remaining damaged T-34/85 managed to load a HVAP round (this is a nice touch in the rules where there is a risk/reward in trying to use better ammo) and took out a Panther. Both sides were now only one loss away from reaching their breaking point.

The Russians won initiative, letting them shoot first - this was grim for the Germans as 2 IS2's were in short range of the remaining Panther. The first IS2 missed, but the second got a hit. Luckily for the Germans, and against all odds, the shot only damaged the tank. The Panther now had it's turn to shoot. Despite the negative modifiers for the damage, shooting through hedgerows etc, it hit and brewed up the remaining T-34/85, bringing Russian losses up to their break point.

Any game that finishes this close is good. It easily took less than two hours and just confirmed how good the rules were.
Posted by Victor at 00:03